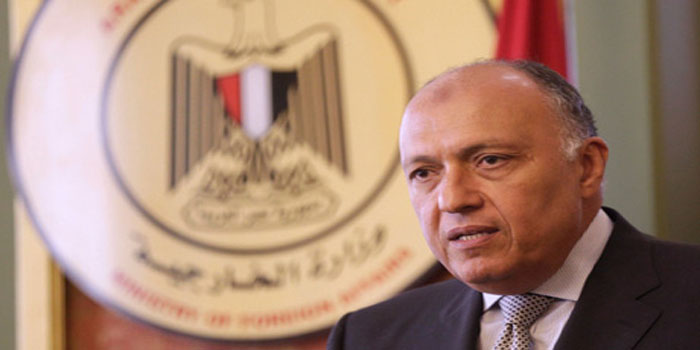 Egyptian Foreign Minister Sameh Shoukry said on Sunday that he hopes new talks between Egypt, Sudan and Ethiopia on the filling of the Grand Ethiopian Renaissance Dam (GERD) reach an agreement on the filling and operation of the mega-dam.
Speaking at a press conference alongside Kenyan Foreign Minister Monica Juma on Sunday in Cairo, Shoukry said that Egypt could face harm if no agreement is reached.
This would be a violation of the principles of international law, he said, adding that Egypt viewed the talks on the GERD from a scientific and not a political basis.
Egypt also supports Ethiopia’s right to develop, he said.
Shoukry’s statements came as a new round of talks between Egypt, Sudan and Ethiopia were launched in Cairo, at the request of Egypt, after months of suspension.
The new round of talks will focus on the filling of the GERD’s reservoir and its rules of operation.
The talks were initially due to be held in August but were rescheduled at Cairo’s request.
Egypt expresses concerns
Ethiopia, Egypt and Sudan have engaged in talks since 2014 to reach a final agreement on the rules of filling and operating the mega-dam.
The filling of the reservoir could have a major effect on the share of water reaching the downstream countries of Egypt and Sudan, and while Addis Ababa has suggested a three-year filling time, Egypt is requesting a period of seven years.
Egyptian Minister of Water Resources and Irrigation Mohamed Abdel Aty, in remarks to reporters last week, said that Egypt has given Ethiopia and Sudan its vision regarding the dam’s filling, and its operation during periods of flood and drought.
He warned that if Egypt’s share of the Nile water decreases by 2 percent, the result will be the desertification of 200,000 acres of agricultural land.
In a meeting with European ambassadors to Egypt on Thursday, Hamdi Louza, deputy foreign minister for African affairs, said Egypt had made a fair proposal to Ethiopia and Sudan regarding the operation of the dam in a way that achieves Ethiopia’s goals in power generation and preserves Egypt’s water interests.
Louza said Egypt’s proposal is based on its previous discussions with Ethiopia and the trilateral declaration of principles signed in March 2015 by the leaders of the three countries, which states that the three sides have to agree on the rules of filling and operating the dam.
During the eighth session of a youth conference held on Saturday, President Abdel-Fattah El-Sisi said that the negotiations with Khartoum and Addis Ababa aim to preserve Egypt’s rights to the Nile waters and to reach an agreement that will see the least harm for Egypt.
He also said that “dams on the Nile… would never have been built” were it not for the impact of the 2011 revolution in Egypt and the resulting instability.
The Nile currently supplies 97 percent of Egypt’s freshwater needs. At around 660 cubic metres per person, this is below the international water poverty level of 1,000 cubic metres per capita.
With a growing population, Egypt is projected to have critical countrywide fresh water and food shortages by 2025, according to a study conducted by the Geological Society of America (GSA).
-Ahram Online
Oct 4th 5:24 AM
Industry News