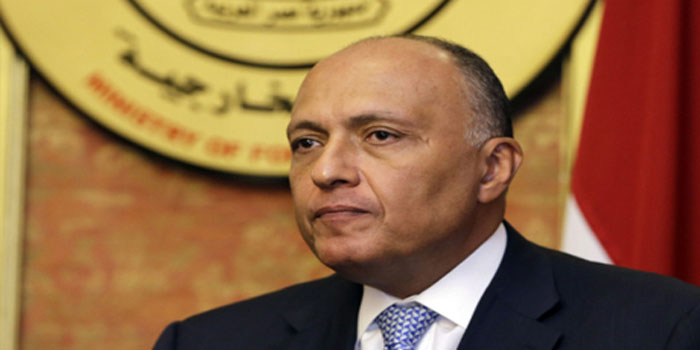 Egypt’s Foreign Minister Sameh Shoukry said during an urgent meeting of Arab foreign ministers in Cairo on Thursday that the ongoing suffering of the Palestinian people is a “moral and political disgrace” for which the international community bears responsibility.

“The Arab summit last month [in Saudi Arabia] declared its rejection, in accordance with international law, of any move that attempts to legitimise any decision that changes the status of Jerusalem,” Shoukry said.

“Here we are meeting again in light of a new tragedy and a major violation committed by the occupation forces against the unarmed Palestinian people, who defend their right to freedom and dignity, and reject having this right taken away by an occupation that lacks any legitimate basis,” Shoukry said.

The extraordinary meeting of the Arab foreign ministers comes at the end of a week in which the Israeli occupation army killed at least 61 Palestinians and injured hundreds during protests in Gaza against the transfer of the US Embassy from Tel Aviv to Jerusalem on the eve of the 70th anniversary of Nakba.

“The Palestinian rights to freedom and an independent state with east Jerusalem as its capital cannot be voided by any unilateral decision,” the foreign minister said.

“Let’s call things by their name, the continued Israeli occupation of Palestinian land is the source of the crisis; is the cause for the ongoing tragedy experienced by the Palestinian people,” Shoukry said.

“It is not acceptable under any circumstance to twist facts, and blame the victim and distract from the root of the Palestinian tragedy, which is the occupation.”

“Ending the occupation is the way to close this sad page in the history of our region,” Shoukry stressed.

The foreign minister insisted that the position of Arab states regarding the identity of Jerusalem is not negotiable.

He called for measures against Israeli’s violations towards the Palestinians.

Shoukry proposed the launching of an international investigations into the use by Israeli forces of live ammunition against unarmed Palestinian civilians.

“The Palestinian people are living under occupation and are exercising their moral, legitimate and legal right to reject this occupation,” Shoukry said.
Shoukry added that resuming peace negotiations based on international legitimacy and the 2002 Arab peace initiative – based on the principle of “land for peace” to end the Israeli occupation and establish a Palestinian state with east Jerusalem as its capital –  is the only way to bring peace to the region.
The Egyptian foreign minister will head to Istanbul on Friday to lead Egypt’s delegation at the Organisation of Islamic Cooperation (OIC) urgent summit on the latest developments in Palestine.
-Ahram Online
Oct 4th 5:24 AM
Industry News