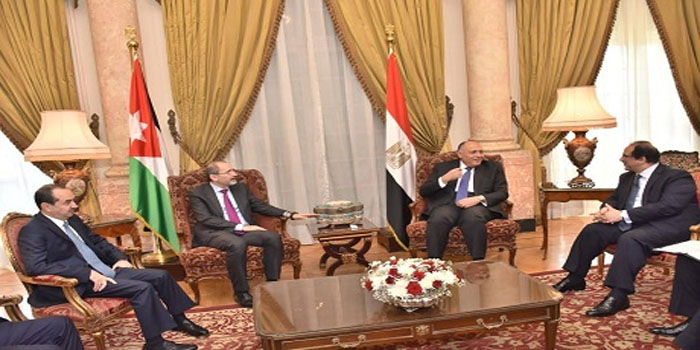 A consultative meeting of Egyptian, Jordanian and Palestinian diplomats held in Cairo on Thursday stressed its rejection of Israeli actions against unarmed Palestinians in recent weeks.

The meeting was attended by the foreign ministers of Egypt and Jordan and the Secretary of the Executive Committee of the Palestine Liberation Organisation (PLO), as well as the heads of the intelligence of the three countries.

A joint statement issued after the meeting said the discussion tackled the latest developments in the Palestinian issue, including the Israeli escalations that have resulted in the deaths of a large number of unarmed Palestinian protesters.

The Arab officials said that the Palestinians are practicing their legal right to defend their territories, live in freedom and safety, and establish an independent state with East Jerusalem as its capital along the 1967 borders in accordance international legitimacy.

The officials also warned that the escalation poses a grave threat to a peaceful and just solution to conflict, which requires the international community to propose solutions and launch effective international efforts to resolve the conflict on the basis of a two-state solution and the Arab Peace Initiative.

The meeting also affirmed the Arab stance on the Arab identity of East Jerusalem and the rejection of any unilateral actions aimed at changing the historical and legal status of the city.

The Arab officials called for implementing the outcomes of the Jerusalem Summit held last month in Saudi Arabia, stressing the necessity of respecting the historical status of Jerusalem as an occupied city subject to negotiations for a final settlement.

The meeting also reviewed ways to intensify and coordinate stances with all international and regional parties to push the peace process forward.

The officials also exchanged views on the Arab efforts within the UN Security Council to discuss means of providing international protection for the Palestinian people and supporting the full membership of the State of Palestine in the United Nations.

The meeting also stressed the importance of implementing the agreement signed in Cairo last October to end the Palestinian division.

The participants discussed ways to improve Palestinian institutions and enable them to manage Gaza as well as improve the economic situation and the standard of living for Palestinians and to alleviate their humanitarian suffering.

The Arab officials agreed to intensify consultation and coordination between the three countries during the upcoming period and to follow up on the developments in the Palestinian territories.