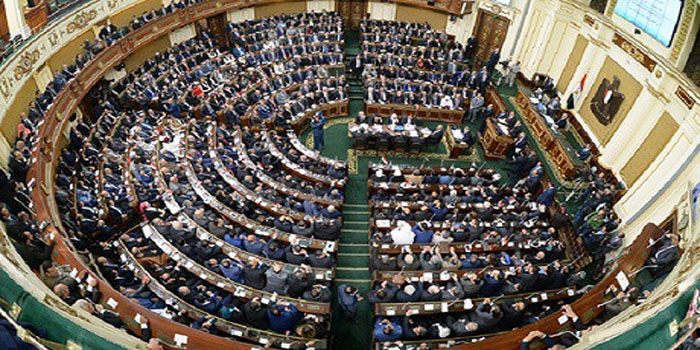 In an opening procedural session on Tuesday, Egypt MPs said Egypt is facing a hostile campaign aimed at destabilising the country and spreading chaos, and that all should join shoulders at this critical stage to stand up to this campaign.

Parliament speaker Ali Abdel-Aal said “Egypt is living in a volatile region and that some hostile forces are trying in any way to target our country.” “But as long as we stand firm in one unified front and have confidence in our leadership, we will be able to stand up to these forces and face all dangers,” said Abdel-Aal.

Abdel-Aal told MPs “let the message of the final session of our parliament be that we are a united nation, and that we support the military, police forces and the political leadership in all the measures they see necessary to protect this country.”

Abdel-Aal said parliament’s final session, though short-lived due to elections scheduled at the end of 2020, will be largely devoted to discussing political laws. “I vow that we will discuss these laws only after we hold a national dialogue on them, and that all forces, including opposition elements, participate in this dialogue and voice their opinions,” said Abdel-Aal.

For their turn, MPs referred in particular to the ongoing hostile media campaign led by Muslim-Brotherhood TV channels broadcasting from Turkey and Qatar, all agreeing that all should stand firm in the face of this campaign.

Kamal Amer, head of parliament’s defence and national security committee, said “some hostile forces living outside and some evil elements living inside are trying their best to stop Egypt’s progress.” “But Egypt has faced such a kind of dangers before and we will be able to face this new wave of attacks as long as we stand united,” said Amer.

Deputy speaker Soliman Wahdan said “over the past two weeks Egypt faced waves after waves of media wars aimed at destabilising and destroying the country, but the Egyptian people stood firm and was able to preserve the state intact.” “We know that more conspiracies are still expected and so we should be aware of this and do our best to protect our country,” said Wahdan.

MPs said the government should do more in the coming period to solve problems facing ordinary citizens in their daily life problems. Gamal Essam El-Din reports
Ahmed Kahirallah, the parliamentary spokesperson of the Islamist Nour party, lamented that “the hostile campaign against Egypt is being orchestrated by some fugitive elements living in Qatar and Turkey.” “This campaign mainly aims to disrupt the country, and turn its citizens into refugees like the case in Syria and Libya and Yemen,” said Khairallah, adding that “there could be corruption and there could be mismanagement, but this does not mean that we let these conspiratorial forces disrupt our country.”

Meanwhile, MPs criticised the government of prime minister Mostafa Madbouli, asking it to do its best to solve problems facing citizens who suffered a lot due to the harsh economic reform measures imposed by the IMF. In particular, MPs lashed out at the

recent decision of the Ministry of Supply to strip many citizens of ration cards.

Speaker Ali Abdel-Aal said in its final session parliament will take a serious stand against the government. “My message to this government, including cabinet ministers and provincial governors, please do not export problems to the president of the republic and to parliament, be up to your responsibilities, and take all measures necessary to improve the living of ordinary citizens,” said Abdel-Aal, adding that “the slogan of parliament’s final session will be “Serving Ordinary Citizens.”

Abdel-Al’s words came amid wide speculation in parliament that there will see an imminent cabinet reshuffle. Diaaeddin Dawoud, a leftist MP, said “the policies of incumbent prime minister Mostafa Madbouli are not different from his predecessor Sherif Ismail, and that the two have been implementing the IMF agreement which caused a lot of pains to ordinary citizens.” Dawoud said “Egypt needs clear air at this stage and that policies should change to mainly serve poor citizens.”

Mostafa Bakri, an independent MP and journalist, said “urgent measures are necessary to reactivate Egypt’s moribound political life and national media.” “Governments in Egypt should initiate a kind of reconciliation with poor and middle-income classes which suffered very much over the last three years,” said Bakri.

In response, parliament speaker Ali Abdel-Aal said he believes that “there will be new measures in the coming period to reactivate Egypt’s political life.”

media should be granted greater freedoms in the coming period in order to be able to face foreign hostile media attacks.” Abu Shoka asked MPs to stand up for one minute as a show of support for President El-Sisi, and the army and police.

At the beginning of Tuesday’s meeting, Abdel-Aal announced that a lot of laws were referred by the government to parliament, mostly tackling economic issues.