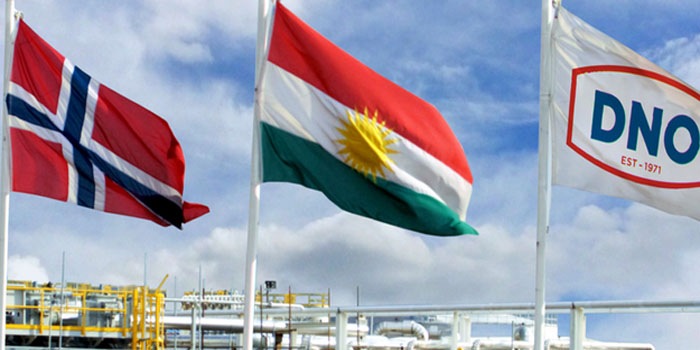 DNO ASA, the Norwegian oil and gas operator, today announced a two-thirds increase in production from the Peshkabir field in the Tawke license in the Kurdistan region of Iraq to 25,000 barrels of oil per day (bopd) following completion of the Peshkabir-4 well testing program.

The well has been placed on production at a rate of 10,000 bopd through a 72/64″ choke with 790 psi wellhead pressure through temporary, capacity-constrained test facilities and the oil trucked to Fish Khabur for export.

The Peshkabir-4 well was designed as a high angle well to assess the central part of the structure four kilometers west of the Peshkabir-3 well and drilled to a measured depth of 3,525 meters, including a 1,150 meter extended reach reservoir section. A total of 11 zones were tested and flowed between 1,500 bopd and 7,000 bopd per zone.

The next well in the 2018 field development campaign, Peshkabir-5, has been drilled seven kilometers west of Peshkabir-3 and has successfully proved the westward extension of the field. Completed in June, it is currently undergoing final testing; a total of four zones have been tested so far and flowed between 4,000 bopd and 7,500 bopd per zone.

DNO will bring this well onstream in August and expects to reach and surpass its previously announced summer 2018 Peshkabir production target of 30,000 bopd.

“The pickup in Peshkabir production puts new meaning to the fast in fast track in development of this field by the DNO team,” said Bijan Mossavar-Rahmani, DNO’s Executive Chairman. “And we expect Peshkabir to continue to surprise to the upside,” he added.

Two other wells, Peshkabir-6 and Peshkabir-7, are drilling ahead at 3,900 meters and 3,100 meters, respectively. Peshkabir-6, a near vertical well, will explore the field’s deeper Triassic formation and establish the Cretaceous oil/water contact level. Peshkabir-7 is a high angle producer well located between Peshkabir-4 and Peshkabir-5.

The Peshkabir field was brought on production in 2017 and two drilled wells last year, Peshkabir-2 and Peshkabir-3, have produced at a constant combined rate of around 15,000 bopd.

DNO operates and has a 75 percent interest in the Tawke license, which contains the Tawke and Peshkabir fields, with partner Genel Energy plc holding the remainder. Together, output from the two fields has averaged 106,000 bopd year-to-date.