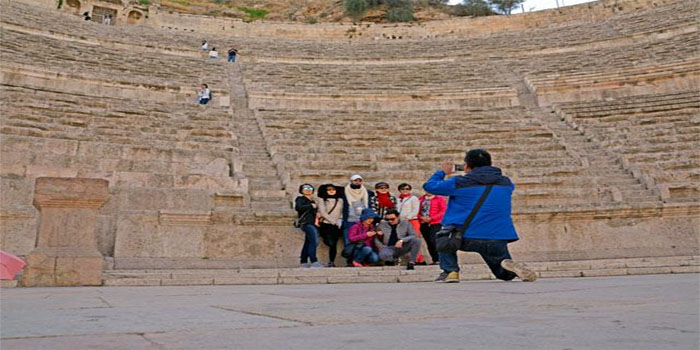 While 2016 registered advancements in several tourism indicators, authorities this year plan to intensify the efforts that led to this pick-up in performance, officials said Monday.

Tourism Minister Lina Annab said at a press conference that the ministry and its partners have worked collectively to alleviate the impact of regional turmoil on the sector, citing the success of market-targeted promotional campaigns.

Despite the increase in the number of visitors, the sector’s revenues in 2016 remained similar to those of 2015 (around JD2.87 billion) due to changes in the origin of tourists, and consequently their spending habits, said the minister.

In 2016, visitors from Asia and the Pacific increased by 19.5 per cent compared to 2015, while the numbers of visitors from other regions over the same period increased as follows: Europe (6 per cent), Africa (5 per cent) and the Americas (3 per cent).

However, the number of visitors from Gulf Arab countries dropped by 10 per cent.

Officials said this was due to the economic measures the Saudi government is taking to cut down expenses, which has influenced the travel decisions of Saudis, who comprise the largest portion of visitors from the Gulf.

Annab noted that there were no major cancellations of tourist programmes after the terror attack in Karak, over 140km south of Amman, which killed seven security personnel and three civilians, including a Canadian tourist.

However, the performance of domestic tourism remains modest, as revenues of this type of tourism were limited to JD77 million, while outbound tourism revenues reached around JD800 million, according to official figures.

“We seek to transfer part of the outbound revenues to domestic tourism revenues by developing the touristic products at various sites across the country to encourage citizens to visit,” Annab said.

Plans for 2017 include further focus on religious tourism as well as adventure and medical tourism, the minister noted.

In May, she added, the Kingdom is hosting a renowned international conference on adventure tourism.

Also speaking at the press meeting, Jordan Tourism Board (JTB) Managing Director Abed Al Razzaq Arabiyat said the board in 2016 identified the five most marketable touristic trends and the countries with most visitors to each touristic style.

This will help better direct promotional materials for each market.

“The number of visitors from all countries targeted by the JTB’s promotional campaign, which was adopted in November 2015, have increased,” he said.

Furthermore, the board will enhance partnerships with charter flight carriers, which have enabled more visitors from Russia and Europe to visit Jordan, particularly Aqaba, 330km south of Amman.

Arabiyat added that the JTB was recently restructured, and it now includes five main units, each will address one of the five preferred tourism patterns — archaeological, adventure, religious, conference and medical tourism.

The board will also review the effectiveness of JTB’s offices outside the Kingdom.

Regarding investments in the sector, 70 projects valued at JD12 million were finalised in 2016, with many of them investing in capacity building for young Jordanians.

There are currently 566 hotels in all classifications in the Kingdom, with some 28,000 rooms. Annab said the figures are low, and hotels are mostly centred in Amman.

To address this issue, the ministry in 2016 issued licences to 24 hospitality facilities (including hotels, hotel apartments, tourist camps and environmental camps), and initial approvals for 97 other hotel facilities.

MP Andre Hawari, head of the tourism committee at the Lower House, called on authorities to take more effective measures that reduce restraints on visitors from certain Arab countries, including Iraq, Libya and Sudan, in order to encourage medical tourism.

Furthermore, he suggested collaboration between the JTB and local universities in promoting visits to Jordan for studying as well as more affordable arrangements for non-Jordanian graduates from Jordanian universities to re-visit the Kingdom.