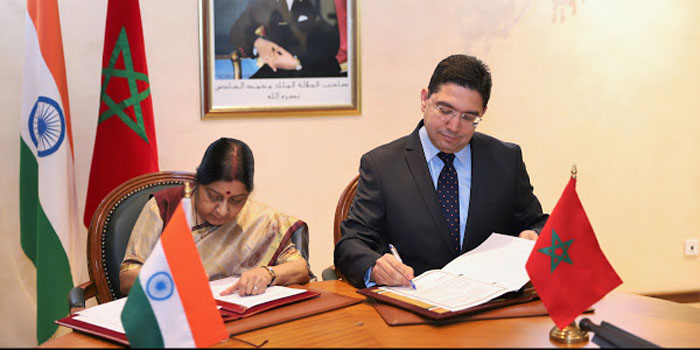 India’s Minister of Foreign Affairs Sushma Swaraj arrived in Morocco on February 16 for a two-day official visit as part of her four-day tour to Bulgaria and Spain.

During her visit, the Indian official held talks with her Moroccan counterpart Nasser Bourita before the signing of four cooperation agreements.

Among the four agreements, India and Morocco signed a memorandum of understanding to fight against terrorism. The agreement includes the establishment of a working group on security cooperation and information sharing to curb ideology-related violence.The group will also consult on issues related to counterterrorism in the United Nations and other specialized agencies.

“India has faced the menace of cross-border terrorism for decades. Therefore, our agreement with friendly nation Morocco signed today [Monday] in fighting terrorism together is important for India,” said the Indian official.Morocco has partnership with several international countries, given its internationally acknowledged efforts to combat radicalization and terrorism.

Morocco’s Central Bureau of Judicial Investigation (BCIJ), which was created in 2015, dismantled dozens of terror cells and arrested hundreds of terrorists.

In the 2018 Terrorism Index, Morocco ranked 132nd out of 163. The document said that Morocco is safer than France and the US in terms of terrorism-linked crimes.

Bourita and the Indian official also inked a memorandum of understanding between the Moroccan housing ministry and India’s housing department to create bilateral cooperation through expertise sharing, including in building technologies and social housing construction.

In another memorandum of understanding, Morocco and India pledged to broaden and strengthen relations on youth issues. The agreement entails the participation of young Moroccan and Indians in joint youth events and activities.

The fourth memorandum of understanding aims to ease the issuing of business visas. The goal is to further commercial ties and make business cooperation easier for business owners from both countries.