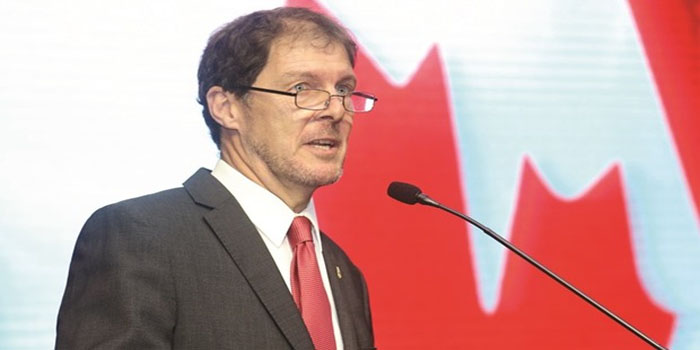 The Canadian ambassador has expressed confidence that Qatari investment institutions and individuals will see Canada as “an extremely attractive opportunity” in the near future.

The envoy, who recently led Canada’s 150th Anniversary of Confederation celebration in Doha, cited some Qatari investments in Canada, which they are now trying to grow further.

The Qatar Trade and Investment mission to Canada in October and Qatar Investment Authority’s participation in a Summit in Toronto hosted by Prime Minister Justin Trudeau in November last year are ‘encouraging examples’ of the interest exhibited by Qatar in enhancing its trade and investment relations with Canada, according to Norfolk.

He said they are expecting more high level visits from Qatar to Canada around investment in the next few months aimed at identifying potential opportunities for further investment.

“Canada presents a really good investment opportunity – the financial structure, the physical structure we have there and of course the potential investments in our range of real estate infrastructure, also natural resources, and high tech startup companies, small and medium enterprises, everything is there,” the envoy noted.

Meanwhile, with Qatar’s focus in developing its infrastructure and security for the FIFA 2022 World Cup, the number of Canadian companies active in the country is expected to increase, he added.

He pointed out that Qatar has been identified as a key market for Canada by its Export Development Corporation due to opportunities that exist for Canadian companies in sectors, including construction, environment, infrastructure, waste water, healthcare, oil and gas, power, rail, and telecommunications.

“There are a range of Canadian companies and institutions already here in areas like education, healthcare, infrastructure, energy, retail, and legal services,” Norfolk said.

“So we can cover the whole gamut of areas and in terms of SME, there are more than 60 companies active in Qatar in key sectors,” he noted.

In 2015, trade volume reached $227.1mn, ranking Qatar as the third largest commercial partner for Canada in the GCC after Saudi Arabia and the UAE.

Canadian goods exports to Qatar in 2015 were close to $180mn with most being manufactured goods, including aerospace products and parts.

Canadian exports of services are significant with Canadian companies, providing services worth hundreds of millions of dollars, including in areas such as architecture, construction, education, engineering, health, legal and project management services, the envoy added.