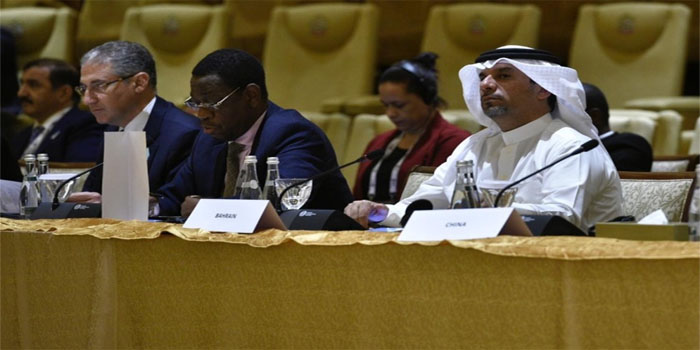 Executive Director of the Supreme Council of Environment, Dr. Mohammed Mubarak Bin-Daina, here today participated in the preparatory meeting aimed at preparing work agenda, recommendations and draft resolutions for introduction and adoption at the UN Climate Summit in September.

The SCE Executive Director’s participation is at the invitation of UAE Minister of Climate Change and Environment, Dr. Thani Al Zeyoudi.

Addressing the meeting, Bin-Daina praised the UAE key role in addressing the global climate challenges, and commended its initiative to host the preparatory meeting prior to the climate summit scheduled in September in New York.

He said Bahrain is a small island country, which is keen to promote international efforts to reduce the impact of climate change through the issuance of legislation, environmental programmes. He pointed out Bahrain’s huge success in the implementation of its national mangrove planting programme that produces approximately 35000 trees annually, which plays a major role in improving the ecosystem and reducing sea level rise resulting from climate change.

He added the Kingdom of Bahrain last year declared that 1336 square km of its maritime territory as a natural reserve area to preserve the wildlife and coral reefs. Accordingly, the SCE, in collaboration with its local partners, has developed many projects and programmes that aim to increase the artificial coral reef areas in the national territorial waters.

On the sidelines of the event, the SCE Executive Director met the UNEP Executive Director, Inger Andersen, where they touched on Bahrain’s distinguished cooperation with the UNEP and the Gulf-UNEP programmes, in addition to joint environment topics.

He invited the UNEP official to visit the Kingdom of Bahrain and to organize meetings to boost cooperation in the same area.

The UNEP Executive Director welcomed the invitation and enhancing cooperation between the two sides.