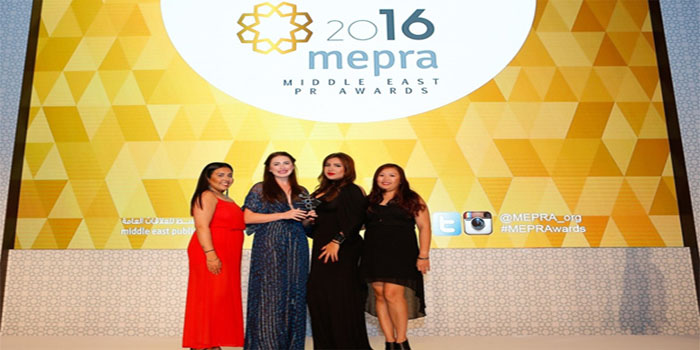 The Public Relations team of Atlantis, The Palm in Dubai was awarded ‘Best in-house PR team in the Middle East’ at the Middle East PR Association (MEPRA) 2016 awards last week.

The Atlantis PR team was recognised for their ability as a team to improve the bottom line of the business and create PR tactics that resonated with markets across the globe. Some of the outstanding examples were dedicated episodes of The Housewives of Beverly Hills and The Housewives of Melbourne as well as the UK series The Travel Man which were filmed at Atlantis.

Additionally, the Atlantis PR team secured the ‘Best PR Stunt in the Middle East’ award for its Aquaventure Waterpark stunt ‘Waterpark Lockdown’ which was created in partnership with Red Bull Middles East. This unique and exciting stunt featured renowned skateboarders Alex Sorgente, Milton Martinez and Jan Hoffmann and saw the talented trio drop, flip and ollie through the 17-hectare Aquaventure site’s 156-metres of tunnels, hitting speeds of 35kph in one of the best waterparks in the world.

“The Middle East PR Awards ceremony is the event of the year for professionals and we are thrilled to have been recognised for two awards during the evening. The PR team continuously endeavours to raise the bar to global standards, and now that we have been recognised as leaders in our field, we have a greater responsibility to think more outside the box for our upcoming PR campaigns,” said Andrea Krenn, vice president Public Relations Atlantis, The Palm.