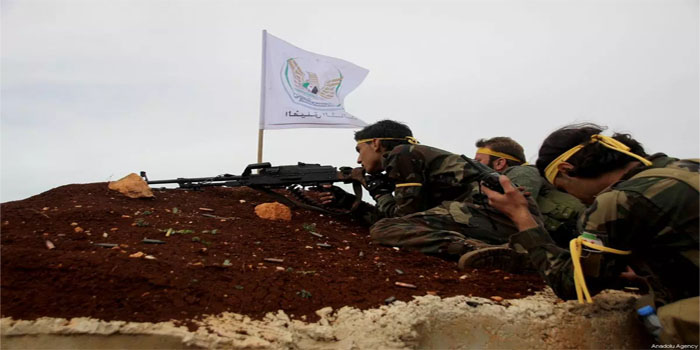 The Syrian army has made significant gains in its offensive on the southern province of Daraa, seizing a chunk of territory from opposition forces after days of heavy aerial bombardment.

State media agencies and war monitors announced early this morning that the regime had captured the town of Busra Al-Harir and the nearby Laja area. The Assad government offensive aims to control the so-called “Triangle of Death” region, which connects the southern Damascus countryside with Daraa and Quneitra provinces.

The strip of territory captured by the regime splits the opposition-held zone, isolating fighters in the north of the province in the towns of Zubayr, Asim and Burj Janin. Local activists have reported an escalation in attacks since last week, with over 60 missiles fired at Daraa city within 48 hours.
Syrian forces are backed by Iranian militias, as well as the Russian military. The Britain-based Syrian Observatory for Human Rights also reported that Russia carried out its first airstrike on Daraa since mid-2017 over the weekend.

The Syrian regime’s latest victory comes after the US warned opposition groups in the south last week that they should not expect American military support to help them resist a major government offensive. Whilst recognising the threat of an imminent attack, the US statement condemned Russian and Syrian escalation, but did not extend any offer of aid.

“We in the United States government understand the difficult conditions you are facing and still advise the Russians and the Syrian regime not to undertake a military measure that violates the zone,” the message also said.

Syria’s southwest region is strategically sensitive because of its proximity to the frontiers with both Jordan and the Israeli-occupied Golan Heights. The US and Russia last year agreed to the implementation of a “de-escalation” zone in the area that helped to contain the violence there, although violations were frequent.

The UN has warned that an escalation in Syria’s south could have dangerous repercussions for the estimated 750,000 civilians in the rebel-held area. The assault has already displaced thousands of people from their homes, with at least 3,000 families headed for the Jordanian border.

Amman has expressed concern over the new arrivals, announcing yesterday that the country could not manage another influx of refugees. It called on the international community to help bring about an urgent resolution to the conflict.