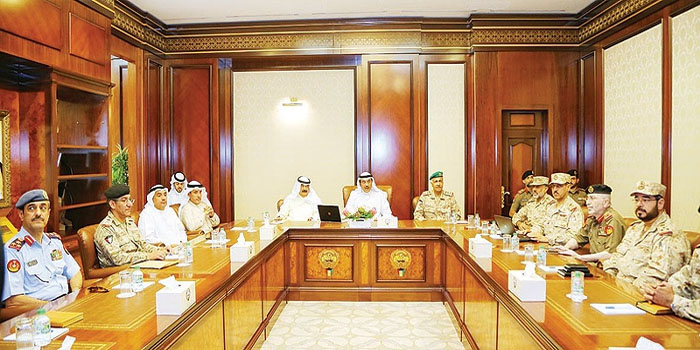 Kuwait’s Deputy Prime Minister, Foreign Minister and Acting Defense Minister Sheikh Sabah Khalid Al-Hamad Al-Sabah received yesterday in the presence of Deputy Foreign Minister Ambassador Khaled Al-Jarallah a number of ranking officers of the Kuwaiti armed forces headed by Army Chief of Staff Lt Gen Mohammed Al-Khodr and Deputy Chief of Staff of the Army General Sheikh Abdullah Nawaf Al-Ahmad Al-Sabah.
Sheikh Sabah Al-Khaled started the meeting by conveying confidence of the supreme political leadership in the armed forces. He praised the armed forces’ efforts in preserving the security of the country, namely all vital installations. He also reviewed the current regional situation and developments. He reiterated Kuwait’s condemnation of the attack on oil installations in Abqaiq and Khurais in Saudi Arabia, voicing Kuwait’s solidarity with Saudi Arabia and the stability and safety of its people.
He stressed in this context on the need for caution and readiness to face any events that lead to destabilization of security and stability in the country and the region, calling on the commanders of the armed forces to intensify efforts to defend the country from any potential dangers. Khodr and chiefs of the vital military sectors in the Kuwaiti army gave a detailed explanation of the recent events and their repercussions on Kuwait and Saudi Arabia, in addition to a comprehensive presentation on how to deal with various possible scenarios, reviewing efforts of the army sectors on land, at sea and in the air.
During the meeting, they reviewed aspects of cooperation and coordination between the foreign and defense ministries in monitoring and following up all potential threats to security of Kuwait and the region, in accordance with the directives of HH the Amir Sheikh Sabah Al-Ahmad Al-Jaber Al-Sabah and Crown Prince Sheikh Nawaf Al-Ahmad Al-Jaber Al-Sabah.